The workshop on “Creating an Export Plan for a Company “ organized by WTC Mumbai in association with Chamber of Maharashtra Industries & Agriculture (CMIA) and MCED at Keys Hotel at Aurangabad on 23rd December 2014, generated much enthusiasm among the industries and business community . Around 70 delegates representing industries, business and students attended the programme. Mr. Virendra S.Gupte, Former Head-Trade Services and Chief Ethics Counselor, Tata International Limited , the faculty for the workshop, discussed in detail with live examples the different facet of international trade and aspects that needs to be considered while entering in the international trade. He elaborated the world trade scenario, India’s external trade as well as the shift that happened in export –import basket of India in the last one decade. He highlighted the global challenges for business organizations, relevance of Global PESTLE analysis, World Bank framework of ascertaining Country attractiveness and Ease of Doing Business parameters. He also discussed the relevance of Market Research, drafting a model Export Contract and a Selling Agency Contract, Key do’s and don’ts in appointing agents, Due diligence of selecting Customers / Suppliers, Role of Trade bodies for seeking trade information and the role of ECGC in supporting exports. He concluded by asking the participants to prepare the flow chart for signing a selling contract. 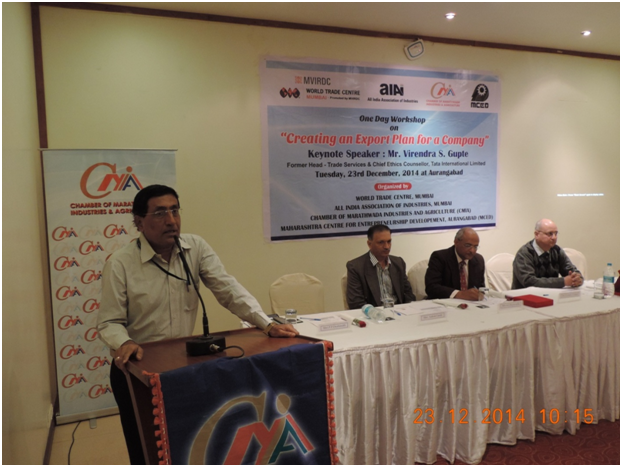 During the opening session Mr.P.P.Deshmukh, Jt.Director-Industries and executive Director-MCED highlighted the importance of the region and steps the govt. is initiating to improve the industrial base in the region. He appreciated the initiatives of WTC Mumbai to organize such events to assist the entrepreneurs. During the meeting Mr. Ashish Garde, Vice President, CMIA signed the MoU of the Chamber of Marathwada Industries and Agriculture with WTC Mumbai.