To explore the potential of joint cooperation, alliances and trade Mr. Naval Bajaj, President, Indo Canada Chamber of Commerce led a high level delegation from Canada to India. The interactive meeting held on 14 January, 2014, was organised jointly by World Trade Center Mumbai and All India Association of Industries. The outstanding bilateral trade relationship that India and Canada share since 1947, has scaled to great heights said Mr. Kalantri. He emphasized that there was more to be achieved in terms of scope for further promoting trade between the two countries. Currently, the bilateral trade stands at US$ 5.2 billion which has to scale upto US$15 billion by 2015, announced by both Prime Ministers of India and Canada. However due to the current slowdown in the Indian economy chances were this figure could only be reached by 2016. Some of the focus sectors where there is scope for joint collaboration are in the areas of agriculture, education and energy. Mr. Richard Bale Consul General of Canada in Mumbai, spoke about the huge gap of the bilateral trade that needed to be bridged, which can be achieved through collaborations in sectors like Oil & Gas for India, while for Canada, this can be achieved mainly in the energy, food security, agri-foods, infrastructure, education sectors. Mr. Bale felt that entrepreneurship would give a further impetus to bilateral trade, wherein India’s huge strengths and Canada’s knowledge based economy especially in the areas of life sciences and technology could help bring about fruitful collaborations. 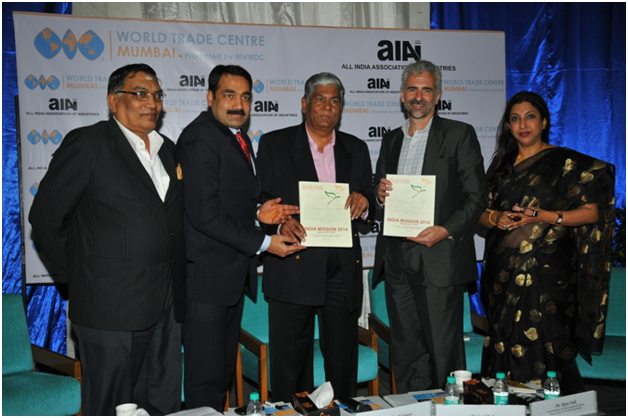 Mr. Naval Bajaj, President, Indo Canada Chamber of Commerce and the leader of the delegation spoke of the contribution made by million plus Indians in Canada. Mr. Bajaj emphasized mainly on the Canada-India Corridor and the Free-Trade Agreement. He elicited concerns on the delay of the FTA which was to be completed in 2013 but now rescheduled for 2014. On the Canada-India File there are big opportunities for both countries in terms of branding, synergies, agri-foods, cold chain, energy, oil & gas and education. He emphasized that Canada was the 6th most sought after country for education in the world. He suggested twinning of education with business or trade. However, there are challenges in India which need to be overcome such as regulation reforms pertaining to entry level and operation, quality assurance etc. while foreign education systems have quality and are competitive.