Delivering the inaugural address, Shri Naveen Patnaik, Hon’ble Chief Minister of Odisha said that Bhubaneswar is a highly planned city with a vibrant knowledge base with a rich heritage.The establishment of the WTC Bhubaneswar adds another feather to its cap. Bhubaneswar will now emerge as a leading city at par with other major cities in the country to enhance and facilitate trade and commerce. With the establishment of the WTC Bhubaneswar, key sectors like IT, electronics, manufacturing, metal based industries, handicrafts, sea food and other export oriented units will receive a major boost. Later in the day, Shri Naveen Patnaik laid the foundation for establishment of a Convention-cum-Trade Zone to be developed at Bhubaneswar. This facility is being set up by the Industrial Infrastructure Development Corporation with a view to provide a commercial center with international standards.The Convention Centre to be established with an investment of Rs.300 crores will be an urban land mark and one of its kind in India.One of the unique features of this project is a sky walk which shall connect the WTC Tower to the adjacent Hotels and the Convention Centre.The Chief Minister added that with the launch of the WTC Bhubaneswar the State of Odisha will join the international network of 330 WTCs in over 100 Countries. 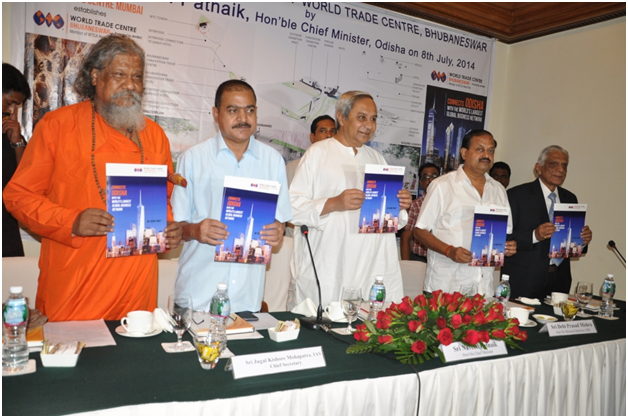 On this occasion, Shri Debi Prasad Mishra, Hon’ble Minister of Industries, School and Mass Education mentioned that over the last few years, the economic growth of Odisha State has been surpassing that of the national growth. WTC Bhubaneswar will spur trade, commerce and tourism in the state with industrial, infrastructure and development corporation acting as a facilitator. Shri Mishra expressed that much more business will follow with the WTC Bhubaneswar acting as a major catalyst. The WTC Bhubaneswar, the fifth project in the country, will help improve the business climate in the State.

Earlier in his welcome address, Shri Vishal Dev, Secretary Industries, stated that the establishment of WTC will significantly improve the trade and investment climate in the state and catapult Bhubaneswar as a leading commercial state in the country.

Shri Dev extended all support to WTC Mumbai in the operation of this new venture.