“The US$ 16 trillion US economy foresees India as a prominent trade and investment partner. The US economy invites lucrative Indian investments as the nation rapidly emerges from the global crisis of 2008. The nation holds a competitive edge in terms of well developed infrastructural status, huge consumer base, stable legal and regulatory framework with availability of skilled & low-cost labour. Also, the economy showers identical treatment to all US domicile companies”, said Ambassador Mr. Vinai Thummalapally, Executive Director, SelectUSA during an interactive meeting jointly organised on 23rd September 2014 by World Trade Center Mumbai and Export-Import Bank of India with SelectUSA.

Elaborating on the road map to enhance Indo-US relation Mr. Thummalapally said SelectUSA works towards fostering US trade and economic relations with other nations through its varied services, assisting new companies intending to set base in the US through dissemination of sector specific information and providing contacts on economic development organizations in the US, lending support in addressing regulatory challenges faced by nascent US domicile companies in the country.

Present on the occasion was Mr. John McCaslin, Minister Counselor for Commercial Affairs, U.S. Embassy - New Delhi. Mr. McCaslin agreed on the need to build India and US relations. The current bilateral trade stands at US$ 63.7 billion. The two economies must work together to target bilateral trade worth US$ 100 billion in the years to come. The economies must augment their cooperation in the areas of trade, investment and finance towards profitable and productive association in the near future, Mr. McCaslin said. 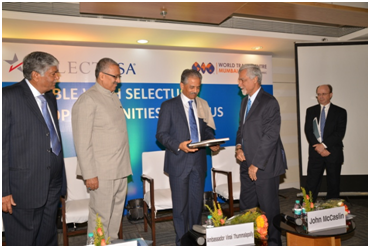 Enumerating further on Indo-US relations Mr. Yaduvendra Mathur, Chairman and Managing Director, Export-Import Bank of India said that the bilateral trade between India and US stood at US$21 billion during 2004-05. The bilateral trade has grown three folds to touch US$ 63.7 billion by the year 2013. The cumulative foreign investments by Indian companies in the US stands at US$ 16 billion in the sectors such as IT, manufacturing, pharmaceuticals, steel, beverages among others. On the other hand, the US is the 5th largest source of FDI into India with cumulative FDI inflows worth US$ 12 billion until March, 2014. The EXIM Bank has assisted 64 Indian companies to invest in the US having an exposure worth Rs 42 billion.

Earlier, in his welcome remarks Mr. Vijay Kalantri, Vice-Chairman, MVIRDC World Trade Center said PM Mr. Narendra Modi intends to promote the Indian economy by improving business prospects of the nation. India has one too many learning lessons to take from the US in its pursuit towards economic development. Precisely, the US must share technological know-how in the sectors of science & technology, nuclear power and manufacturing with India. Also, the US holds surplus oil and gas reserves while India seeks to tap new energy markets. With the Federal Reserve deciding to keep interest rates stable in the next few years, India may be looked upon as a lucrative investment destination by the US. India seeks to invest US$ 1 trillion to upgrade its infrastructural status; the US investments may aid the same. Also, the MSME sector of India seeks lessons from the SB administration of the US. In all, India and the US must join hands to cooperate, learn and grow together.