Exports of marine products, spices, guargum, cereals may be affected the most

The complete lockdown in China and Italy as a result of COVID-19 may affect India’s agriculture and allied exports (excluding cotton) worth USD 245 million in the current month (March 2020), an analysis of monthly export trend in the previous year shows. Of this, exports to China itself may be affected to the tune of USD 192 million. China and Italy together account for around 9% of India’s overall agriculture exports to the world, of which China’s share is 7.7%.

The outbreak of the epidemic will disrupt the recent growth momentum in India’s farm exports to China. Agriculture exports to China grew a whopping 89% to USD 1.49 billion in 2018-19 from the previous year. During April-January 2019-20, farm exports have grown 85% to USD 2.13 billion from the previous year. As a result, China’s share in India’s agriculture exports has grown considerably from 3.9% last year to 7.7% in the current year because of increasing shipments to that country.

As a result of trade disruption, the most affected sectors will be shrimps & prawns and spices, that together account for around 70% of India’s farm exports to China. Exports of other agro products that may be affected include processed guargum, cereals, groundnut oil, castor oil, jams and jellies, sugar etc. Specifically, exports of coffee, which contribute almost 50% to India’s exports to Italy may be affected. Other sectors that may be hit from disruption in shipments to Italy are: marine products, basmati rice and vegetable oil.

The following table provides India’s exports of key farm commodities to both the countries in March 2019. 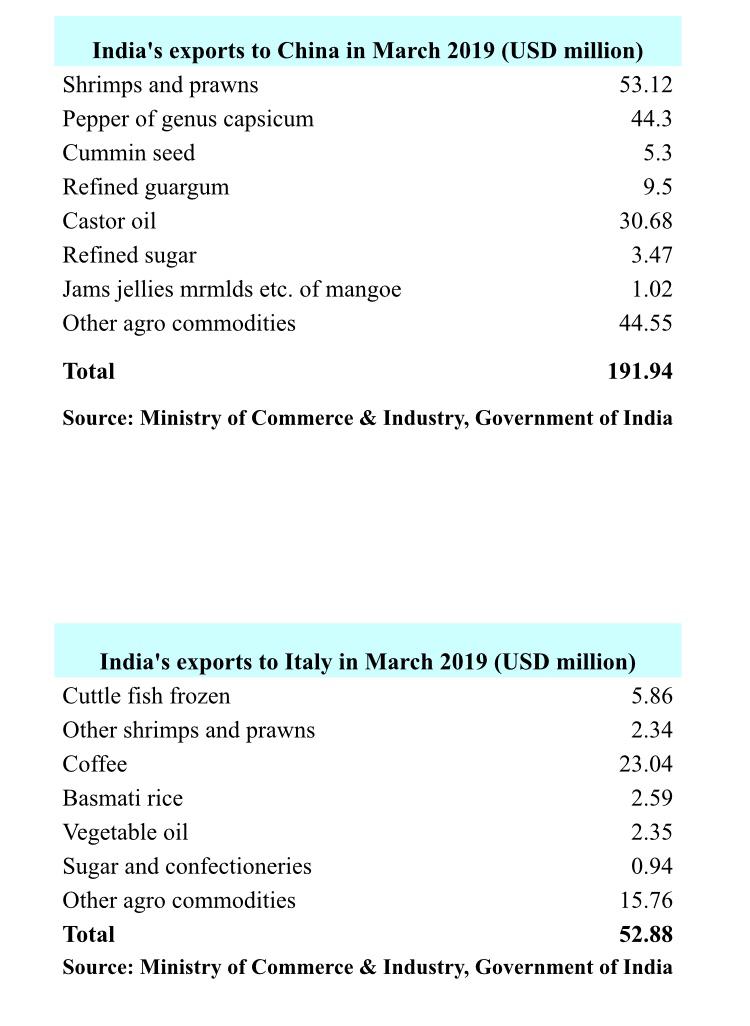 India may also face decline in agriculture exports to other countries in the current month because of cancellation of international flights and disruption in shipping activity. Airway is the preferred mode of export for perishable farm commodities.

Commenting on the disruption to agriculture exports, Ms. Rupa Naik, Senior Director, MVIRDC World Trade Center Mumbai said, “Although China accounts for hardly 7.7% of India’s overall agriculture exports, it is one of the high potential markets, with sharp growth in exports in recent period. In fact, exports to China grew despite contraction in overall farm exports to the world.”

During the first 10 months of the current financial year (April-January 2019-20), India’s total agriculture exports declined 6.1% to USD 27.87 billion from the year-ago period. Similarly, agriculture exports to Italy declined 6.2% to USD 322 million in April-January 2019-20. However, farm exports to China grew a whopping 85.7% during this period from USD 1.14 billion to USD 2.13 billion.