“India and China have been posed with the challenge of sustaining their growth momentum. In order to promote growth the two nations must join hands. The two economic super powers comprise the global growth engine besides being the largest consumption and manufacturing markets world over. To address the sluggish growth prospects posed by economic slowdown the economies must collaborate rather than compete”, said Dr. Liu Youfa, Consul-General of the People’s Republic of China in Mumbai during a seminar on “Trade and Investment Opportunities in China” organised on 25th February 2014 by MVIRDC World Trade Center and All India Association of Industries with the Consulate of the People’s Republic of China in Mumbai. Enumerating on the need for complementing mutual complementarities Dr. Youfa said that China holds expertise in the manufacturing sector while India is home to a thriving services industry. The manufacturing sector of China contributes to nearly 47% of Chinese GDP while India contributes meager 24%. India must tap the surplus manufacturing capacity of the Chinese manufacturing hub. On the similar lines China can look forward to sharing expertise of the Indian medical, IT and education sector. 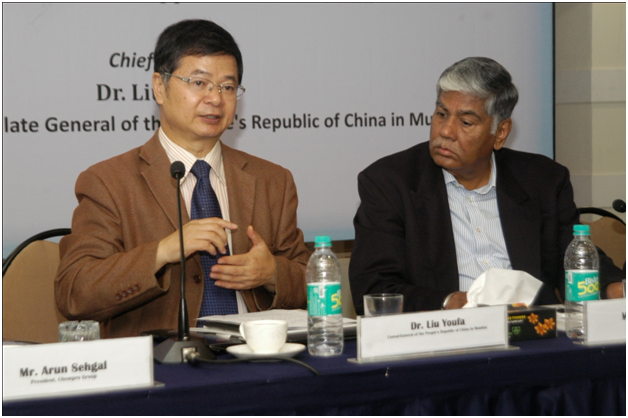 Dr. Liu Youfa, Consul-General of the People's Republic of China in Mumbai along with Mr. Vijay Kalantri, Vice-Chairman, MVIRDC World Trade Center and President, All India Association of Industries during the seminar.

Touching upon other areas of mutual cooperation Dr. Youfa said a precondition to economic progress is infrastructural development. The Indian economy intends to invest US$ 1 trillion in its infrastructural sector. Chinese entrepreneurs must explore investments in this sector. Also, cooperation in the areas of capital market investments, modern agriculture, tourism, education, etc may be explored.

Earlier, in his welcome remarks Mr. Vijay Kalantri, Vice-Chairman, MVIRDC World Trade Center and President, All India Association of Industries said trade and economic relationships between India and China have shown rapid progress in the last few years. The bilateral trade worth US$ 3 billion in the year 2000 has crossed US$ 65.8 billion in 2012-13. However, the issue of trade imbalance in favour of China lingers. It may be addressed through cross border capital flight and diversifying areas of mutual cooperation to services, tourism, medicine and education, Mr. Kalantri added.