“The economies of India and Brazil share many complementarities in the form of large demographic population, huge consumer base and an identical industrial and trade framework. Also, the Government’s of Brazil and India support each other’s candidature at bilateral forums such as BRICS, G-20 and G-4 and multilateral arenas such as UN, WTO, UNESCO, etc. Both the economies are regarded as emerging markets with untapped natural resources with great potential for development. Given this, the two economies must forge ties together towards economic prosperity”, said Ms. Isabela Medeiros Soares, Deputy Consul, Consulate General of Brazil in Mumbai during an interactive meeting on 20th May 2014 organised by WTC Mumbai, All India Association of Industries and the Consulate General of Brazil in Mumbai.

Mr. Elson de Barros Gomes Jr., Consul of India in Minas Gerais said today’s meet has opened avenues for Brazil and India to take learning lessons from each other. The nations must work towards gaining potential connections and sharing industry best practices with each other. 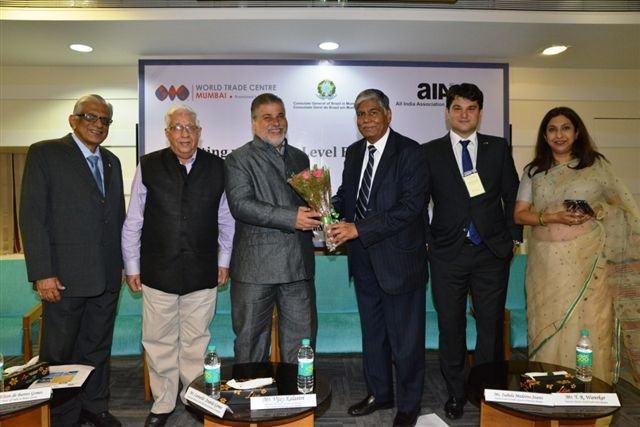 Mr. Leonardo Ananda Gomes, Executive Director of the India Brazil Chamber of Commerce confirmed that India and Brazil have huge complementarities bringing the two economies closer. In order to take the relationship further we need to enlarge business and trade partnerships. The step forward for the day is that the business delegation identifies local partnerships in India and exchange knowledge amongst each other.

Mr. Filipe Ferreira, Instituto de Desenvolvimento Integrado de Minas Gerais – INDI gave a brief presentation on Minas Gerais region of Brazil. Earlier, in his welcome remarks Mr. Vijay Kalantri, Vice-Chairman, MVIRDC World Trade Center and President, All India Association of Industries said India and Brazil have deep rooted historical ties. At present, India-Brazil bilateral trade stands at US$ 10 billion. India’s main products of export to Brazil are diesel, polyester yarn, chemical products, drugs and cotton yarn while the main imports by India from Brazil include crude oil, sugar, soy oil and copper. There have been two way investments between India and Brazil. While the Brazilian companies have invested in automobiles, IT, mining, energy, biofuels, footwear sectors in India, the Indian companies have invested in such sectors as IT, Pharmaceutical, Energy, agri-business, mining, engineering/auto sectors in Brazil. Foreign direct investments (FDI) by Indian companies in Brazil till 2013 is US$ 103.25 million from Infosys, Pidilite, RSB, Fomento, Inox, Unichem, etc. FDI inflows from Brazil into India have been US$ 23 million till 2013. Going forward, we intend to target bilateral trade worth US$ 15 billion by 2015, Mr. Kalantri added.

During the occasion WTC Mumbai and India Brazil Chamber of Commerce signed MoU of cooperation towards economic growth and integration. Over 500 B2B meetings were organised with the delegation in the sectors such as herbal medicines, research and development in pharmaceuticals, cosmetic pharmacy, healthcare & loboratory pharma, medical equipments, etc.