“The Indian economy is regarded as a rapidly growing power house. However, the economy is sparse with regard to funds. The European Union can make a useful contribution to help India with its capital requirements. Also, the Free Trade Agreement between the nations in its finalization stages is expected to generate trade opportunities and investor friendly climate between the nations. But issues such as retrospective taxation and GAAR compliance play hindrance”, said H. E. Dr. Joao Cravinho, Ambassador of the European Union to India during an interactive meeting organised by WTC Mumbai and All India Association of Industries.

Europe can play a central role in helping the Indian economy grow. Over the years, the EU has been by far the largest investor and trading partner of India with FDI inflows worth $ 13.15 billion during 2011-12. But during 2012-13 the inflows dropped to $ 4.93 billion. The decrease in the FDI inflows has been led by widespread opposition in the form of retrospective taxation, GAAR provisions along with overall bleak macroeconomic prospects. Limited FDI provisions and restrictions on joint ventures need to be done away said Dr. Cravinho echoing the views of the European business community. Elaborating on prospective sectors for EU’s investment in India Dr. Cravinho said that as India plans to invest US$ 1 trillion in its infrastructural sector, India may look upto the EU for these investments. European FDI may flow into technology transfer, know-how and experience as well. 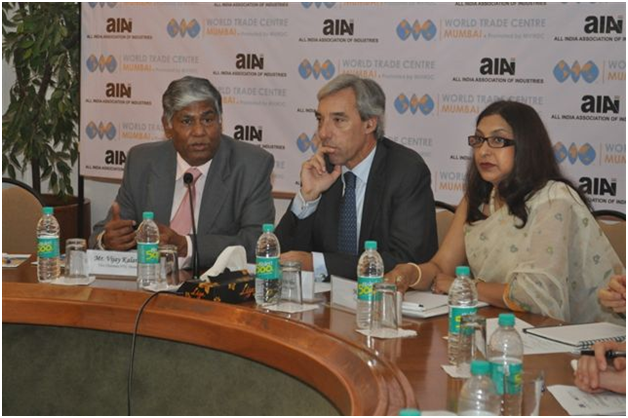 Earlier, in his welcome remarks Mr. Vijay Kalantri, Vice-Chairman, WTC Mumbai said that the European Union is a prominent trading partner of India with India’s Export to European Union worth US $ 50.42 billion and India’s imports from the European Union worth US $ 52.27 billion. Trade in services amongst the countries stands at € 22.2 billion. Also, the EU is also one of the largest sources of Foreign Direct Investment for India. FDI inflows from the EU into India increased from €3.5 billion in 2009 to €7.5 billion in 2010 and €14.19 billion in 2011. The rapidly growing Indian economy provides a land of opportunities in the sectors of infrastructure, manufacturing, logistics, etc. However, the economy needs to initiate investor friendly policies in the form of tax holidays, proactive and transparent bureaucratic policies, permission to form joint ventures, etc. The European Union has an advantage in the form of physical proximity in comparison to the USA and Australia, Mr. Kalantri added.