“The exciting times that we are living in are transformational in nature for India. We can all perform wonderfully well under the present government which is focused in its goals to provide meaningful and inclusive growth. This can be achieved when the 22 percent of the population that is below the poverty line, the 50 percent below the empowerment line and the disadvantaged are included in such growth. This has brought us to the juncture to relook at the urbanization process, since growth and in turn employment is generated from the urban sector”, said Shri Shankar Aggarwal (IAS) Secretary, Ministry of urban Development, Government of India, who delivered the keynote address at interactive panel discussion on ‘Smart Cities in India: Reality in the Making’ jointly organized by MVIRDC World Trade Center and All India Association of Industries along with the Indo-French Chamber of Commerce & Industry.

While addressing how 100 Smart Cities initiative came about, Shri Aggarwal said that the process started with the Swachh Bharat Abhiyan, to rejuvenating heritage towns, bringing about urban renewal of 500 towns leading to creation of the 100 smart cities. He highlighted that Indians were basically entrepreneurial by nature. India possessed demographic dividend and the urban population of 31 per cent contributes to 63 per cent of GDP. It is education that would bring about empowerment; however the quality of education is poor which can be fixed through the right infrastructure such as e-education, imparting good quality skills. Each step of the process can be made sustainable and frugal innovation can be introduced in every area which then can be supported by governments and semi-government bodies.

Shri Aggarwal advocated that national priorities could be made a reality through technology, innovation, citizen involvement, employment generation through ‘Make in India’ while improving the quality of life. In order to bring about the smart cities concept, it is important to introduce competition among cities through the Bloomberg Philanthropy whereby funding solution to urban challenges could be reached. Assuring to set up 100 cities in a span of 10 years, Shri Aggarwal was supportive towards adding to the existing strength of the people, providing the necessary hand holding in seeing projects through and being a facilitator in the entire process.

Mr. Sanjay Sethi (IAS). Additional Metropolitan Commissioner-I, Mumbai Metropolitan Region Development Authority (MMRDA) while attempting to define the smart city concept said that the right definition would emphasize the process of creating a smart city and not the final product. Providing a case study on the Bandra-Kurla Complex (BKC) in making it a Brownfield Smart City Project, he said that they were achieving it through the use of ICT and non ICT initiatives coupled with the right urban design. Besides, the formation is based on foundational, advanced and futuristic initiative which is the way forward. Smart BKC was being built around centricity, business and making it environment friendly through the process of continuous innovation. It was being conceptualized in comparison to global cities. In a similar way, Smart Wadala Greenfield project was being conceptualized to include mixed land use, smart transport, pedestrian segregation, green buildings, intelligent buildings and smart physical infrastructure.

Mr. Abhishek Lodha, Managing Director, Lodha Group brought in the aspect of the private sector in the creation of smart cities. He opined that some of the most livable cities across that world have incorporated the various smart elements to improve the quality of life for its citizens. Smart Cities need to become smarter in multiple domains across governance, sustainability while improving overall quality of life of its citizens he added. Citing the example of Palava, a project involving an initial investment of Rs. 30,000 crore, he said that the project was exemplifying the smart city opportunity with numerous initiatives being rolled out.

Earlier in the welcome address, Mr. Vijay Kalantri, Vice Chairman, MVIRDC World Trade Center and President, All India Association of Industries, while stressing on the need for infrastructure in order to create smart cities he said that the Honorable Prime Minister Shri Narendra Modi announced the 100 Smart initiative which has opened up a plethora of opportunities as well as challenges necessitating some innovative approaches and measures. Although a vision to make Smart Citiesy was in place, he stressed the need to frame policies for the implementation process while also making the people involved accountable.

On the occasion, a Handbook on Smart Cities India - Reality in the Making was released at the hands of the dignitaries present on the dais.

Addressing the session on “ Smart Cities and Sustainable Development”, Mr. Nilesh Purey , vice President, ICT , Gujarat International Finance Tec- City Co. Ltd ( GIFT) spoke about GIFT which is being implemented as a globally benchmarked International Financial Service Centre . GIFT is a classic example of a public private model developed by the Government of Gujarat through a joint venture between its undertaking Gujarat Urban Development Company Ltd. ( GUDCL) and Infrastructure Leasing & Financial Services Ltd. ( IL&FS) . Recognizing the potential of the State as a centre for the financial services industry , GIFT is being conceptualized as a financial and IT Services hub to capitalize on the in- house financial business acumen. Located between Gandhinagar and Ahmedabad , GIFT is easily accessible through 4-6 lane State and national Highways and will be in the proximity of Delhi Mumbai Industrial Corridor ( DMIC) . It is estimated that GIFT would provide 5, 00,000 direct jobs and an equal number of indirect jobs . Supported by state-of – the – art internal infrastructure, GIFT CITY is being developed as an integrated smart city which will also host social and residential facilities like School, Training Centre, Business Club, Retail Mall, Hotel and Residential Apartments.

Dr. Amiya Kumar Sahu, Founder, National Solid Waste Association of India ( NSWAI),lamented that our country has remained oblivious to the needs of garbage and waste management , a prerequisite for any smart city . Dr. Sahu said that smart cities must be built in a designated area far away from the existing large metropolises so as to keep these cities insulated from outside waste. This will ensure clean air and clean water . A major challenge before the smart cities will be the management of e-waste. Smart cities will generate and absorb a huge amount of high-tech gadgets resulting in huge quantity of e-waste. This will pose great environmental threat to these cities . Further, modern lifestyle and change in food habits will lead to enormous amount of dry waste which needs to be treated. Therefore the aim of the smart cities should be to promote zero garbage concept by handling waste properly. According to Dr. Sahu, waste can be recycled to produce energy and he advocated the setting up of waste – based power plants owned by the public sector. Mr. Sanjay Thukral, Country Sales Head and Director , Steria India Pvt. Ltd. emphasized on the need for efficient services to fulfill the basic needs of human beings. All urban services should be synchronized and coordinated in a manner so as to produce the desired benefits for the people living in these smart cities. Services should be seamlessly connected . Therefore, connectivity is the fundamental aspect. Every smart city must support a central command and contol solution to ensure smooth and intelligent transport and traffic. Mr Thukral highlighted on the Steria Intelligent Transport Solution which integrates different public transport systems. Finally, Mr Thukral stressed on the need for intelligent traffic management which is a basic requirement of any smart city. 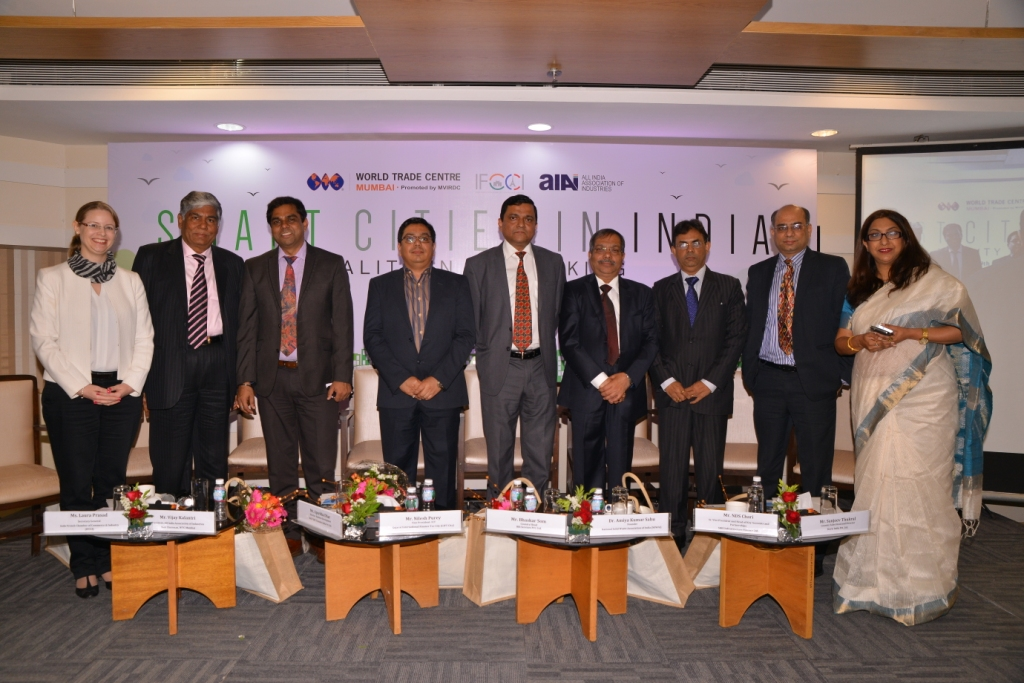 Mr. Apurba Dhar, Director, BD RATP Dev Transdev India , said in an urban setting, there is an increasing number of interconnected and even overlapping transportation services. The development of information technology has led to a new form of mobility that combines transportation , information, innovation and socializing. To travel better, make the right choices and set preferences, a whole range of Mobility Companies are available for traveler’s use. Mobility Centers provide each passenger with the necessary information and services to prepare and organize their day – to -day travel from door-to- door and from one mode to another, including pedestrian. RATP Dev Transdev is a pioneer in the development of digital mobility solutions.

Mr. NDS Chari, Senior Vice President and Head of Key Accounts and Partnerships, SREI Infrastructure Finance Ltd. discussed the importance of financing and revenue generation mechanisms . Mr. Chari laid emphasis on selecting the right funding partner and advocated their involvement right from the start of the project planning. Mr Chari spoke of holistic financing since according to him financiers and bankers have a major stake in the project. The session concluded with a vote of thanks by Ms Laura Prasad, Secretary General, Indo French Chamber of Commerce & Industry.