“For the first time in India’s history, government identified 12 champion sectors and line ministries to promote exports.” says Mr. Suresh Prabhu, Hon’ble Minister of Commerce & Industry and Civil Aviation, Government of India in a video message at the World Trade Expo 2018 organized by World Trade Centre Mumbai and All India Association of Industries . Mr Prabhu further stated that India is poised to increase its share in global trade. In 2017-18, India’s exports have recovered and started growing at 9% after declining for several years. Further he stated,” I am happy to share that the recovery of India’s exports has started during my tenure as Minister of Commerce”. In the current year, India’s exports are growing at 15-16%, despite small blip in last September.

India’s Ministry of Commerce is working on a strategy of preparing a comprehensive road map to promote India’s export. As a part of this initiative, Government of India has called upon the line ministries to discuss export promotion strategy apart from giving targets and ideas to each of these ministries to enhance exports.

Ministry of Commerce has already prepared and cleared the agriculture exports policy which will soon be cleared by the Cabinet. Also policies for various territories and regions have been formulated. Commerce Ministry is holding meetings with its counter parts in African countries, where India’s export share is hardly 8%. Similar talks are on with Latin America. Government of India is also identifying potential new markets in Central Asia.

Speaking on this occasion, Amb. Manoj K. Bharti, Additional Secretary (ED and States), Ministry of External Affairs, Government of India said, “The rise of India is the one of the most significant economic stories of our time. India has the global advantage on three major aspects: Democracy, Demography and Demand. The long-term growth prospect of the Indian economy is positive due to its young population, corresponding low dependency ratio, healthy savings and investment rates, and increasing integration into the global economy. India’s cost-competitive and highly efficient and advanced manufacturing sector has attracted international companies to set up research and development labs as well as production and service infrastructure for the global market. These measures will help India realize its goal to attain a US$7 trillion economy by 2030 from the current US$2.4 trillion.”

In the concluding remarks, Mr. Damian Irzyk, Consul General of Poland in India said, “The European Union is India’s largest trading partner,accounting for 13% of India’s overall trade. Our bilateral trade in commercial services has tripled to Euro 29 billion in the decade ending 2016. European Union is also the second largest investor in India with Euro 70 billion cumulative FDI between 2000 and 2017, accounting for a quarter of total foreign investments into the country . Mr Irzyk invited Indian companies to take advantage of the strong consumer market of 38 million people in Poland.

H.E. Mr. Ernest RWAMUCYO, High Commissioner of Rwanda in India said,“India and Afric together make a vibrant economy of 3.5 billion people and USD 5 trillion economy, with greater voice in the world trading regime. In the last 15 years, India-Africa bilateral trade has grown 20 times and today it stands at USD 70 billion. This has the potential to grow much faster and can cross the USD 100 billion mark in the next couple of years.”

“India’s share in world trade is hardly 2.15%, which is far less than its contribution of 3.21% to world GDP. India has signed multiple trade agreements with some countries. These complex agreements make it difficult for Indian exporters to understand the duty benefits, concessions and eligibility conditions to avail these benefits.” said Dr. Rajan Sudesh Ratna, Economic Affairs Officer, Trade, Investment and Innovation Division, UNESCAP 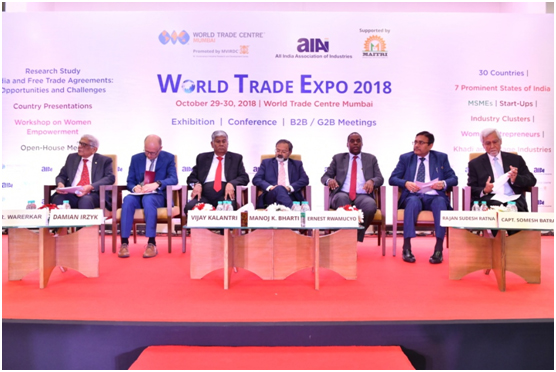