“Tacoma is an investor-friendly and innovation-friendly city in USA. The city ranks top on ease of doing business; It is relatively easy to start business in our city because of its small size, excellent service delivery and faster turnaround time in getting business approvals. The City Administration handholds foreign investors by providing demographic and market information and offers attractive tax incentives. We facilitate eligible foreign investors to get green cards, for their entire family, in two years. Although Tacoma is small in size, the city has strong global ties and it has made 15 Sister Cities across the world. Tacoma values trade and we welcome diversity and plurality. Trade is about learning and lifting each other,” said Mr. Anders Ibsen, Deputy Mayor, City of Tacoma said in an interactive meeting organised jointly by MVIRDC World Trade Centre Mumbai and All India Association of Industries (AIAI).

Speaking about logistics and maritime infrastructure in Tacoma, Mr. Ibsen said, “The city has the third largest port in USA with a container throughput of more than 4 million TEUs. The port is connected with excellent railway system, which ensures that goods can be transported to any part of America within one week. The Port of Tacoma is the closest access point to Asia. Tacoma is a trade dependent city, with an annual foreign trade volume of USD 75 billion. Trade and related sectors account for around 40% of total employment.”

Highlighting the investment opportunities in Tacoma, the Deputy Mayor said, “The city has tremendous investment potential in housing, infrastructure, hospitality, ports & logistics and technology sectors. The city has tremendous shortage of housing and we invite construction companies from India to meet unmet demand in this sector. We also invite Indian film studios to explore film shooting in Tacoma. Further, Indian students can explore education in Tacoma, which has world class education institutions.”

Earlier in his welcome address, Mr. Vijay Kalantri, Vice Chairman, MVIRDC World Trade Centre Mumbai and President All India Association of Industries (AIAI) said, “India and USA have excellent relationship in trade, diplomacy and culture. Today, the bilateral trade between both the countries stands at USD 110 billion and Prime Minister of India and USA expect this to double in the next three years. Businesses from both the countries have tremendous scope to enter into joint ventures and exchange of technologies in aerospace, healthcare and other sectors.”

Speaking about India-Tacoma relationship, Mr. Kalantri said, “Currently, Japan and China are the major trade and investment partners of Tacoma. However, in future, India can also be a major commercial partner with this city. Government of India’s ambitious programmes such as Make in India, Startup India, Digital India, among others, can be a catalyst for bilateral partnership with Tacoma. I invite companies from Tacoma to take advantage of these schemes.”

Mr. Anders Ibsen led a delegation of government and business leaders from Tacoma to this interactive meeting.

The event was attended by representatives from trade and industry, government departments, academic institutions and tourism sector. 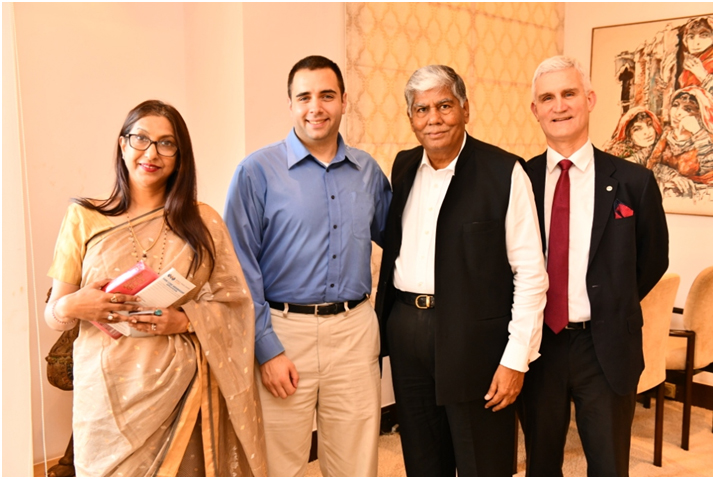