“World Trade Expo is an amazing platform to promote exports and investment in Maharashtra. I invite participating countries to explore investment opportunities in Maharashtra, which is the leading industrial state of India. The state accounts for 30% of foreign direct investment and it has fantastic ecosystem for industries. We have one of the best manufacturing base and the state contributes 15% to India’s GDP. Maharashtra offers financial incentives to industries, which is the best-of-its kind offered by any state government in India,” said Dr. Harshdeep Kamble, IAS, Secretary - Industries & Mining and Development Commissioner (Industries), Directorate of Industries, Government of Maharashtra at the 3rd World Trade Expo 2019 in WTC Mumbai. The event was organised by WTC Mumbai and All India Association of Industries (AIAI).

In his address, Mr. Suresh Kakani, IAS, Vice Chairman and Managing Director, Maharashtra Airport Development Company Ltd said, “The vision of Government of Maharashtra is to make the state a preferred destination for aviation by 2025. I urge entrepreneurs to tap the huge potential in the emerging aviation industry of the state. Maharashtra had four airports in commercial operations till 2016 and in the last three years, MADC has added five more airports to this tally. MADC has operationalised Greenfield airports at Nagpur and Shirdi. Development of two Greenfield airports at Purandar, Pune and Chandrapur are in the pipeline. In the next five years, MADC aims to develop and operate about six new airports in Tier – II and Tier – III cities of Maharashtra. This will take the total number of operational airports to more than 15 in the state, thereby providing seamless connectivity to semi-urban population.”

Mr. Kakani informed that Shirdi Airport is the fastest growing airport in India; the passenger handling capacity of the airport will double to 1.4 million in the coming years.

Mr. Kakani invited industries to set up units at Asia’s largest processing SEZ, MIHAN, located adjacent to the International airport in Nagpur. India’s leading aviation companies, such as Tata Aviation, Dassault Reliance, Indammer, Air India and others have set up operations in this SEZ.

Speaking on this occasion, Mr. P. Mallikarjunaiah, Regional Director (Western Region), O/o The Development Commissioner (Handicrafts), Ministry of Textile, Government of India said, “India’s handicrafts exports is growing at a rate of 15% per annum and I expect this growth momentum to continue in the coming years. India’s rich handicraft sector employs over 60 lakh artisans across 32 major crafts and more than 100 sub-crafts that together export USD 4 billion worth products annually. However, India’s handicrafts exports represent hardly 3% of world exports and hence there is great scope for increasing our exports. Every village in India has its unique traditional handicrafts made of metal, wood, textile, stone and other materials. I am confident that World Trade Expo will help Indian artisans explore new foreign markets.”

Earlier in his welcome remarks, Mr. Vijay Kalantri, President, All India Association of Industries (AIAI) said, “The 3rd World Trade Expo is set to open a new chapter in India’s relations with the 30 participating countries, that together contribute 40% to world exports. At a time when world export growth is slowing, the participating countries will discuss new avenues for trade and technological partnerships. The two-day event will generate cross-country collaboration through trade, technology transfer, investment, tourism and cultural exchange. I am confident that this Expo will provide renewed momentum not only to international trade, but also to the global engagement of Maharashtra, which aims to become a USD 1 trillion economy by 2025.”

In his remarks, Captain Mr. Somesh Batra, Vice Chairman, MVIRDC World Trade Center Mumbai informed that the participating countries account for 44% of India’s foreign trade and 61% of India’s inbound foreign direct investment. Captain Batra expressed confidence that the Expo will build on the success of the earlier two editions and open new vistas of partnership for Indian MSMEs and handicraft sectors.

The inaugural session of the Expo was attended by Ambassadors, Consular Corps, government officials and representatives of trade and industry from around 30 countries. The Exhibition at the event featured trade promotion agencies from more than 30 countries, 50 MNCs and many Indian companies.

The two-day World Trade Expo will have 10 country presentations and more than 2,000 B2B meetings among 5,000 delegates. 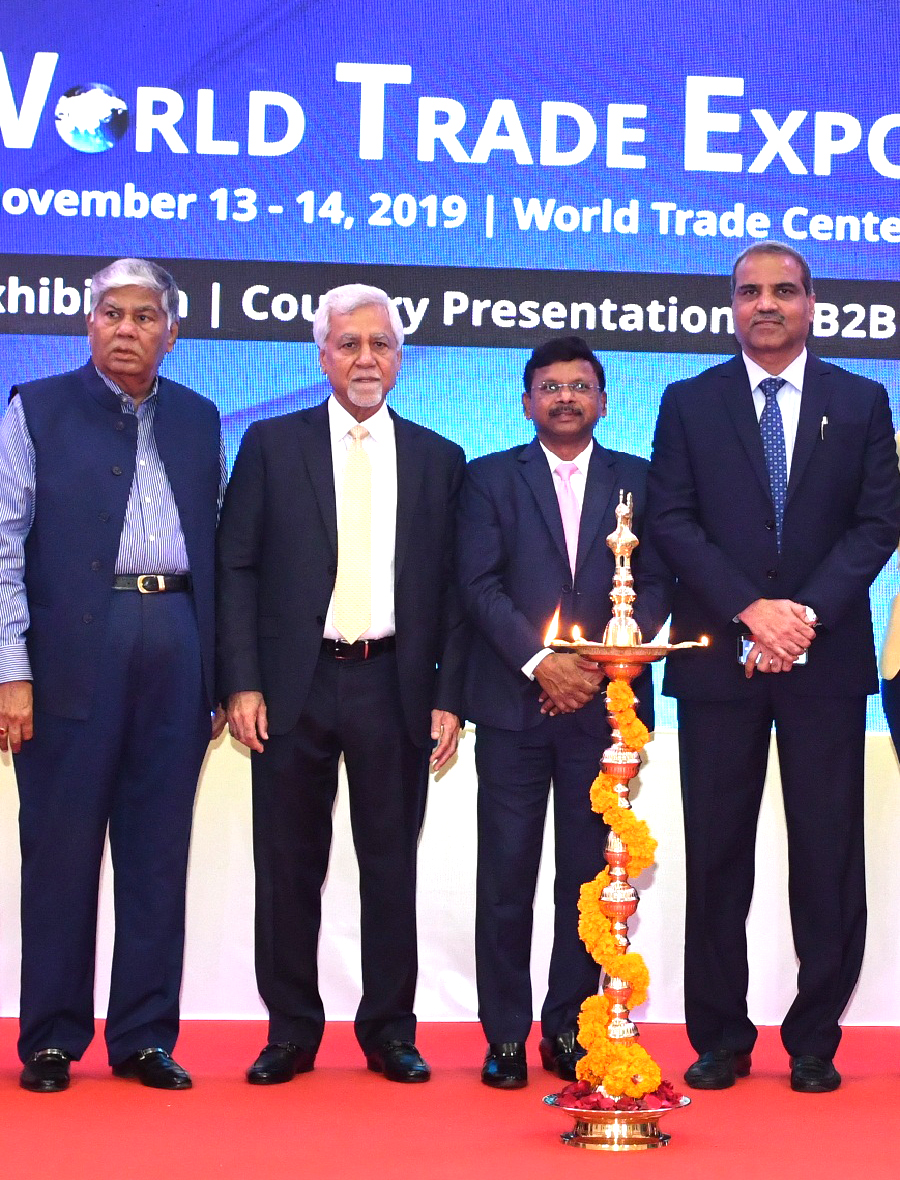