Uzbekistan is a land of opportunities for doing business, says Mr. Oybek

“The year 2019 is declared as the Year of Active Investments and Social Development in Uzbekistan. Uzbekistan is the investment paradise for foreign investors. I invite Indian companies to invest in the Kashkadarya Region of Uzbekistan and benefit from export opportunities to the 300 million consumer market of the Commonwealth of Independent States (CIS). Uzbekistan enjoys preferential market access to the CIS region. Our government is committed to promote investment from India. Our government has a system of regular communication with foreign investors and we address their challenges in timely manner. Government of Uzbekistan has liberalized foreign investment policy and it deals with foreign investors on first come first serve basis,” said Mr. Shagazatov Oybek Bakhodirovich, Vice Governor of Kashkadarya Region in Uzbekistan at the Business Forum organised by MVIRDC World Trade Center Mumbai, All India Association of Industries (AIAI) and the Embassy of Uzbekistan.

In the tourism sector, Kashkadarya Region has more than 1000 historical sites and many monuments that are more than 2,000 years old. The region has a well developed airport and the government is considering to invite Indian companies to operate airport infrastructure.

Speaking about other potential areas of investment in the region, Mr. Bakhodirovich said, “Kashkadarya Region is the leading producer of grains and meat. The region offers favourable agro-climatic condition for growing vegetables and fruits such as apple, peach, pomegranate, grapes, watermelon, among others. It is also the largest producer of cotton and it accounts for 80% of the mineral production in Uzbekistan. The region holds tremendous potential in logistics sector as all the cargoes moving to the neighbouring countries in the South pass through this region.”

Mr. Bakhodirovich specifically highlighted the potential for cultivating and exporting pepper from Kashkadarya Region. He said, “The region exports around 50,000 tonne of pepper to South East Asia. Pepper cultivators receive orders from Asian countries such as China.”

Speaking on this occasion, Mr. Ulugbek Yunusov, Deputy Governor of Namangan region in Uzbekistan remarked, “The Region of Namangan is poised to become the leader in all fields of the economy. The region enjoys steady economic growth, favourable business climate, sound financial system, strong telecom infrastructure and investor friendly policies. Government of Uzbekistan has given special policy framework to attract foreign direct investment in areas such as free economic zones (FEZs).”

Mr. Yunusov informed that his government is taking steps to transform the Namangan airport into an international hub for promoting trade and tourism. The local government is negotiating with the national government to secure authority to operate the airport, modernize and develop its infrastructure, allow foreign carriers to operate there and implement open sky policy in the aviation sector.

The Deputy Governor invited Indian companies to explore joint venture and cluster development opportunities in textile sector and agriculture sectors, as the country is a major importer of readymade garments and agro-commodities. “Although Namangan is a champion in the textile sector, with more than 1400 active textile units, there is still not sufficient capacity to meet domestic demand for readymade fabric. Foreign investors can procure good quality cotton produced in Namangan.”

Mr. Yunusov also invited India’s pharmaceutical companies to invest in its free economic zones (FEZs). Government of Uzbekistan offers incentives such as concessional land tax, property tax and other fiscal benefits for companies investing in these zones and exporting at least 25% of their output in the first year of operation.

Speaking about the tourism potential in Namangan, he said, “Namangan region is home to 282 cultural heritage and 155 archeological monuments. The region received tourists from more than 52 countries last year. The regional government has allocated 30,000 hectare land for domestic and foreign companies investing in hotels and other tourist infrastructure.”

In his address, H.E. Mr. Farhod Arziev, Ambassador of Uzbekistan in India remarked, “Hon’ble President of Uzbekistan Mr. Shavkat Mirziyoyev visited India twice in the last six months and this demonstrates our commitment to strengthen bilateral relationship. We have active exchange of delegation at the levels of deputy Prime Minister and other ministers. In January 2019, Uzbek-India Foreign Ministers Initiative was launched to kickstart dialogue on various areas of cooperation. There is tremendous scope for promoting people-to-people contact, cultural exchange, education and tourism. Recently, India’s Amity University and Sharda University established their presence in Uzbekistan.”

H.E. Mr. Arziev further informed, “Cooperation in the information technology field has started with the establishment of Uzbek-India technopark. In the field of culture, The Year of Uzbek Culture will be launched in India and The Year of Indian Culture will be observed in Uzbekistan from next year. Both the countries are also implementing joint film projects.”

The Ambassador expressed confidence that this Business Forum will result in fruitful networking session and mutually beneficial business partnership in the days ahead.

Earlier in his welcome remarks, Mr. Vijay Kalantri, Honorary Consul General, Republic of Uzbekistan in Mumbai and President, All India Association of Industries (AIAI) said, “Uzbekistan is the land of opportunity. The country has strong historical ties with India. The current bilateral trade volume of USD 350 million does not reflect the true potential for cooperation. We assure full support to the Government of Uzbekistan to increase this trade volume to USD 1 billion in the next two years. Both the countries have tremendous scope for collaboration in areas such as oil and gas, tourism, hospitality, pharmaceuticals, agro-processing etc. We are happy to note that Government of Uzbekistan has introduced e-visa for Indians. It is the only country after Thailand to offer e-visa for Indians free of cost.”

Mr. Kalantri expressed gratitude to the Ambassador for his support and cooperation in organising this Business Forum. 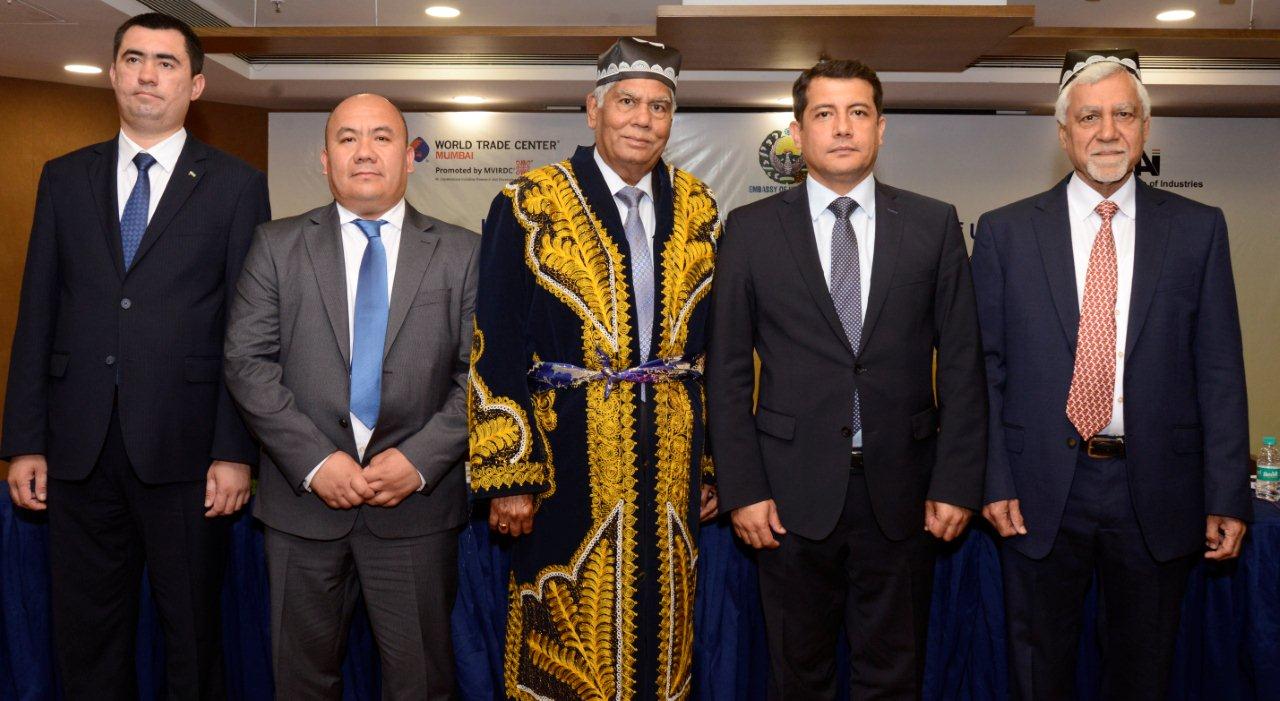