MVIRDC World Trade Center Mumbai received overwhelming response from more than 100 delegates for its workshop on international marketing organised in Kolhapur on June 18, 2019. The event was organised in association with Department of Industries, Government of Maharashtra and the Kolhapur Chamber of Commerce & Industries.

This programme gained significance at a time when Government of India and Government of Maharashtra are taking steps to accelerate India’s exports in the coming years.

The programme is part of the third edition of the Center’s flagship event World Trade Day Maharashtra to spearhead a state-wide awareness campaign on skill development to enhance the global competitiveness of micro, small and medium enterprises (MSMEs).

According to a finding by MVIRDC World Trade Center Mumbai, Kolhapur has untapped potential for employment creation and global value chain integration in sectors such as textile, leather, engineering and agro-processing in Kolhapur. Almost 80% of micro and small enterprises in Kolhapur are engaged in agro processing and cotton textile industries.

Emphasizing on the export potential in Kolhapur, Mr. A O Kuruvila – Advisor – Trade and Education, WTC Mumbai, welcomed the participants and explained the underlining objective of organizing such sessions. He also mentioned that similar sessions are planned in other key cities like Nashik, Amaravati, Jalgaon, Solapur & Palghar.

He explained the role played by MVIRDC World Trade Center Mumbai in promoting international trade with various activities including training courses in foreign trade. He spoke about the objective of WTD and how it helped MSMEs in building knowledge and confidence in entrepreneurship. He also elaborated on the services offered by WTD and encouraged MSMEs to get benefit by associating with WTC. He also said about various courses offered by WTC to skill entrepreneurs to be global.

Mr. Khedker who is the senior faculty of WTC Mumbai was the main speaker for the program. He said that balance of trade (BOT), which is an indication of Forex inflow and outflow is a major issue of our economy. “Our Balance of Payment (BOP) may be overtly comfortable (because of strong inflow of foreign capital), but BOT is an issue as our imports far exceeds exports.

India’s foreign trade policy aims at improving BOT at micro level of a firm so that aggregated it may help towards achieving positive BOT.”

Mr. Khedker further explained, “India needs to promote exports aggressively in the background of trade competition and political issues relating to tariff and non tariff barriers. The training we impart is to encourage industries to export good quality products at competitive prices by enhancing their competence with thorough knowledge of all aspects of international trade.”

Mr. Varun Chulate, Assistant Director from EEPC spoke about EEPC by elaborating on the specifics of markets for engineering products, existing and unexplored markets and specific schemes available to enter in to these markets.

World Trade Day is a unique initiative of World Trade Centers across the world to create awareness on international trade and its impact on economic development and regional growth. The session benefited MSME units representing auto-components, agro processing, textile and other manufacturing sectors in Kolhapur.

Similar sessions will also be organised in other parts of Maharashtra, such as Amravati, Nashik, Solapur, Jalgaon, Palghar and Ratnagiri. 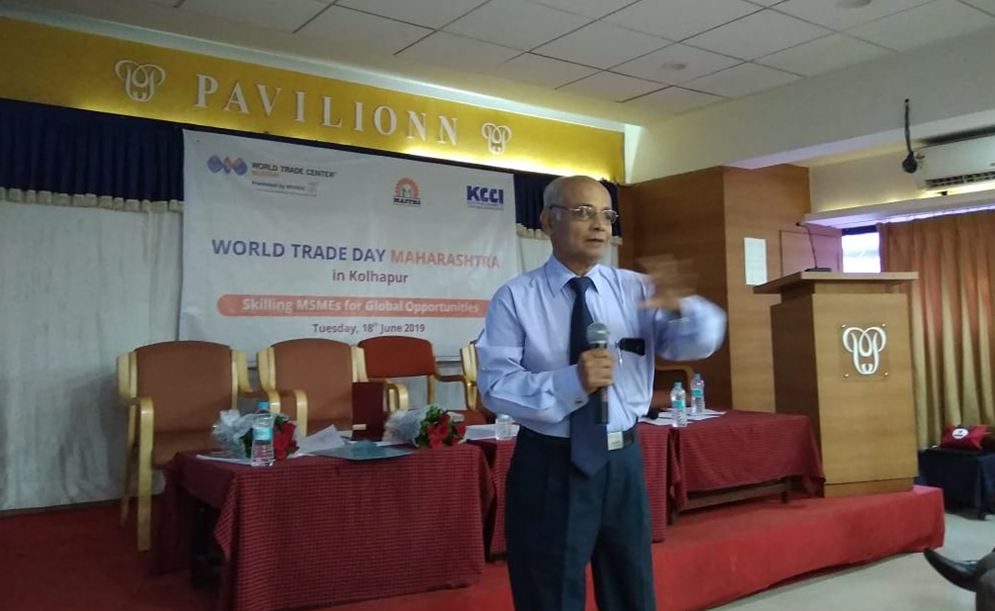