“In an uncertain and challenging global trade scenario, India is actively looking at diversifying its trade partners. Latin American and the Caribbean (LAC) countries have emerged as important economic partners for India. Among GRULAC countries, Colombia holds key to enhance its international trade”, said Mr. Guillermo Acevedo, Executive Director, WTC Medellin and WTC Cali at an interactive discussion organized by WTC Mumbai. Mr. Acevedo urged Government of India to organize an annual / biennial India-GRULAC conference to promote bilateral trade. He said fashion, apparel, wellness and healthcare, BPO and technology are some of the sectors of focus for Indian companies.

Highlighting the importance of the Colombian economy, Mr. Acevedo said, “Colombia is the 31st largest economy in the world and the 4th in Latin America. It has a growing middle class and is the most ideal country in Latin America to do business with as per the ‘Doing Business 2017’ report. It has the lowest FDI barriers in the Latin American and Caribbean region.”

Speaking of Valle del Cauca, a department in southwestern Colombia, he said “It accounted for 10% of Colombia’s GDP in 2017 and witnessed a growth rate of 3.5% in 2018. It is Colombia’s main port on the Pacific Ocean and has proximity to Colombia’s internal market, thus addressing 65% of the GDP and 61% of the population i.e. 2/3 of main cities consumption. It has the most diversified export basket of the country representing industries such as agro, pharmaceutical, BPO, packing, fashion etc. Commerce, manufacturing industries and accommodation and food services represent 60% of the Cali’s businesses.”

Mr. Acevedo is in Mumbai on an invitation from the Ministry of Commerce, Government of India for participation in a textile programme.

Two MOUs between WTC Mumbai, and WTC Medellin and WTC Cali, respectively were signed during the programme. The three WTCs will work towards establishing science and technology parks in India and Colombia, in addition to undertaking various activities to promote bilateral trade.

Earlier in her Welcome Address, Ms. Rupa Naik, Senior Director, WTC Mumbai, emphasized on the importance of enhancing bilateral relations between India and Colombia and suggested that Colombia can serve as India’s gateway to Latin America. She stressed on the importance of SDGs, especially in trade, investment and exports and added that all WTC Mumbai programmes are organized to address the 17 SDGs effectively. She further requested Mr. Acevedo to lead a delegation to Mumbai to enhance bilateral relations between the two countries. 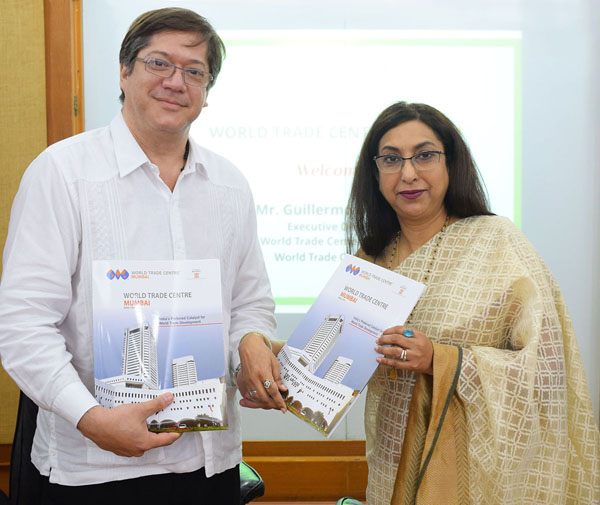