“India is the pharmacy of the world and Indian companies supply substantial amount of medicine to Philippines. COVID Pandemic offers the best opportunity to promote bilateral trade. We need more G2G and G2B collaborations to boost trade and commerce. India-Philippines Joint Working Group on Trade and Investment held its last meeting in 2016 and we need to conclude an agreement on this soon. Both the countries should expedite agreements on drug regulatory standards, conclude MoU in the information and communication sector and sign Air Service Agreement. Philippines can be the gateway for Indian companies to enter the 650 million consumer market of ASEAN,” said H. E. Mr. Ramon S. Bagatsing Jr., Ambassador, Embassy of the Philippines, New Delhi at a webinar on ‘Exploring Business opportunities in Philippines – India in the New Normal’, with special focus on pharmaceutical sector. Amb. Bagatsing suggested Indian companies to set up ASEAN regional headquarter in Philippines. This will open unlimited opportunities for India’s ICT, pharmaceuticals and other companies to explore the vast ASEAN market. Indian companies can also benefit from the fiscal and non-fiscal incentives provided by the Government of Philippines to foreign investors.

The Ambassador further pointed out that the current volume of bilateral trade does not reflect the true potential. Bilateral trade today stands at USD 2.05 billion. “We need to enhance this trade volume by exploring partnership in areas such as hospitality, healthcare, information and communication technologies etc. A more liberalized drug regulatory regime can promote two-way trade in pharmaceuticals. Philippines attracts 125,000 Indian tourists annually and we can increase this exchange of tourists by signing Air Service Agreement,” the Ambassador remarked.

Amb. Bagatsing suggested India’s pharmaceutical companies to set up R&D facilities in Philippines and avail of the funds allocated by Government of Philippines for developing COVID related drugs. The Ambassador also invited Indian investors to look for investment in New Clark City, which is an upcoming smart, sustainable and disaster-resilient city near Manila in Philippines.

H. E. Mr. Shambhu S. Kumaran, Ambassador, Embassy of India, Manila emphasized that India- Philippines Political relations has got renewed impetus with the recent exchange of ministerial level delegations. He said, “We need to maintain this momentum by expanding our economic partnership. Role of industry bodies and chambers of commerce is important in catalyzing this relation. Exchange of business delegation between both the countries is sporadic and we need to provide greater thrust on this to grow two-way trade.

Amb. Kumaran also emphasized on the need to reduce timelines for approving new drugs in Philippines and providing greater market access for Indian pharmaceutical companies. The Ambassador assured that he would work with authorities in Philippines to promote Indian medicines in that market. India and Philippines should collaborate in pharmaceutical R&D by instituting academic chairs and setting up Centres of Excellence in Traditional Medicine in each other’s countries. Amb. Kumaran called for greater policy clarity in Philippines to provide an enabling framework for Indian investment in that country.

Ms. Eries M. Cagatan, Director – Board of Investment, Department of Trade and Industry, Republic of Philippines suggested Indian companies to invest in Philippines and benefit from its preferential trade agreements with Japan, EFTA countries (Iceland, Liechtenstein, Norway, and Switzerland), USA and EU. Indian companies can explore investment opportunities in biologics, vaccine and essential medicines, where there are hardly a few companies in Philippines.

Ms. Cagatan informed that Government of Philippines will soon pass a new legislation that provides fiscal incentives for high value foreign investors, do away with conditionality such as nationality and minimum export requirements. Philippines will also reduce corporate tax from 30% to 20% by 2027, Ms. Ms. Cagatan mentioned.

Earlier in his welcome remarks, Mr. Vijay Kalantri, Vice Chairman, MVIRDC World Trade Center Mumbai said, “India is the pharmacy of the world and the country can collaborate with Philippines in generics, traditional medicine, APIs, bulk drugs and other areas of healthcare. Indian companies should use the India-ASEAN free trade agreement for preferential market access in Philippines. We need to encourage bilateral chambers of commerce to exchange delegations and organize interactive meetings to promote two-way trade. WTC Mumbai is committed to facilitate buyer-seller meetings and exchange of delegation to promote bilateral trade in pharmaceutical sector. In the past, WTC Mumbai has taken various initiatives to enhance two-way trade. We have also signed Memorandum of Understanding with Philippines Chamber of Commerce for promoting trade.”

Ms. Rupa Naik, Senior Director-MVIRDC World Trade Center Mumbai proposed vote of thanks for the event. Ms. Naik said, “India is the largest supplier of vaccine in the world and it is also the leading exporter of generic medicines to the world market. Philippines can be an ideal gateway for India’s pharmaceutical companies to enter into the ASEAN market.”

The webinar was attended by representatives from pharmaceutical and healthcare, biotechnology, telemedicine, medical tourism and traditional medicine sectors. 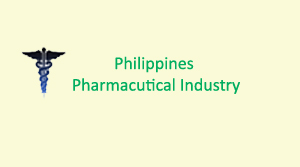 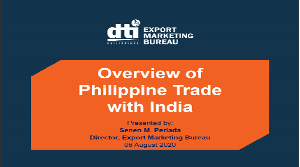