Kyrgyzstan can be gateway for 200 million consumer market of Eurasia

“India and Kyrgyzstan are united by an ancient, rich history and traditional values. We wish to bolster our relations through mutual cooperation in trade & commerce. Kyrgyzstan is an open and friendly country with stable political climate, freely convertible currency and cosmopolitan culture. There are more than 300 companies operating in Kyrgyzstan with partnership from Indian firms. The number of Indian tourists in Kyrgzstan grew 15 times after the introduction of e-visa system. On the other hand, Kyrgyz medical tourists have spent more than USD 5 million in India in the last two years. Indian pharmaceutical companies have signed more than 35 joint ventures with Kyrgyzstan and there are more than 15,000 Indian students pursuing medicine in our country. Agriculture is one potential sector for mutual cooperation. Already, Kyrgyzstan is importing pineapple, tea and other agro products from India and in future there is scope for sourcing vegetables from this country,” said H. E. Mr. Asein Isaev, Ambassador, Embassy of the Kyrgyzstan at an interactive session at WTC Mumbai.

The event was organized jointly by World Trade Center Mumbai and All India Association of Industries (AIAI) in association with Indian Chamber of International Business (ICIB).

Speaking about the attractiveness of business environment in Kyrgyzstan, the Ambassador pointed out, “The new government of Kyrgyzstan is committed to protect the interests of foreign investors, which falls under the personal supervision of President Mr. SadyrJaparov. Foreign investors can open a company in Kyrgyzstan in just two steps and can get all mandatory licenses in eight days. Our government is willing to provide free land and electricity to Indian pharmaceutical companies willing to set up plant in Kyrgyzstan. There is blanket tax holiday for the first five years. Companies in Kyrgyzstan have preferential market access to a population of more than 1 billion across Central Asia, CIS, European Union and other countries.”

The Ambassador informed that India and Kyrgyzstan are working to recognize each others’ high education courses to facilitate movement of skilled workers. He also suggested solar power companies in India to offer their technology for power projects in Kyrgyzstan.

Earlier in his welcome remarks, Dr. Vijay Kalantri, Chairman, World Trade Center Mumbai said, “As Kyrgyzstan celebrates 30 years of Independence, we should take resolve to triple bilateral trade volume in the next three years as the current level of USD 44 million is below the true potential. WTC Mumbai is committed to host trade delegation from Kyrgyzstan in future and we will also create awareness about potential areas of partnership among Indian industry. Both sides have untapped potential to collaborate in tourism, entertainment, pharmaceuticals, textile, engineering, machinery etc. Indian companies can set up manufacturing operations in Kyrgyzstan and make it a gateway for entry into Eurasia and the CIS market of more than 200 million consumers.”

Mr. Kalantri suggested that the central Asian countries can introduce one common visa for the entire region to promote trade & investment, instead of having separate visas for different countries. He also called for greater ties between Mumbai, the commercial capital of India and Kyrgyzstan. He suggested, “Mumbai, which is the capital of the most industrial state Maharashtra, can be a potential hub for promoting bilateral relations. The Embassy of Kyrgyzstan in India can have a dedicated secretariat in Mumbai to receive trade enquires and facilitate mutual trade and commercial relations.”

The interactive session was attended by members of trade & industry, financial institutions, academia, government officials, including consular corps and others. 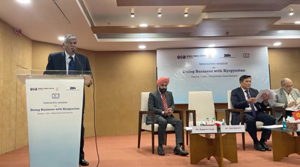